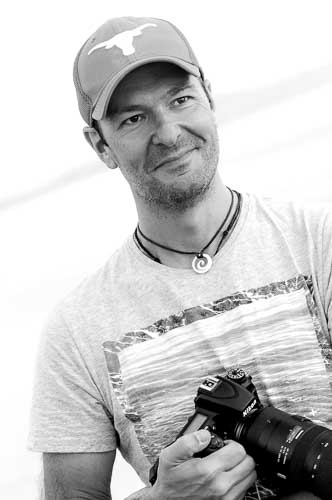 "Focus on the Story"

Thomas Baertl is what happens when you put a detective and a storyteller behind a lens and give him the job to capture your unique story.

He uses both deductive reasoning and the principles of storytelling to capture a scene which occurs for just a moment.

From his visual storytelling, you get the pursuit of  technical excellence, technology and kit. He defines and crafts the visual tone for your company or your personal identity.  It could be embedded in a fingerprint of nature, an environmental portrait or an abstract which will never occur again.

This deductive approach means he thoroughly analyses your purpose, core values and uniqueness. He plans with great detail the desired message to your stakeholders, the apropriate location, the direction of a sunbeam or the position of the milky way. When on site, he visually records your strory with an inductive approach. He observes  and picks the best angles and locations, and knows when the most beautiful scene appears, ready to be shot. MADE-TO-MEASURE in its best way.

Thomas loves to share his passion for photography and storytelling. He also helps others learn as well as participate in the never-ending-improvement of the photography craft. Enjoy his photo stories, dive into his portfolio,  or contact him to share a photo hunt together.

He is like a fortune teller. He sees things that even the camera does not yet know is a picture. Until he pushes the shutter release, he feels the image instead of seeing it. I’m very happy that he shares these “feelings”. Otherwise I would never have the chance of experiencing that moment myself. That’s what impact photography is about.

This detective-like approach has a lifetime of influence from great mystery writers who featured the skills of amazing problem-solvers in detail. Thomas and his Dad Gerd would read mystery books together and go out on photo hunts together. Equally interesting to the little Thomas, was these detective’s quirky and eccentric way, which inspired both his interest for painstakingly detailed work and creative flow and inspiration. Thomas would marvel over Edgar Allan Poe’s method from the August Du Pin, Agatha Christie’s Poirot and Arthur Conan Doyle’s Sherlock Holmes. Not only because of the magnificent storytelling. Also because these detectives used various forms of logic. Some of them are Poirot’s “order-method-symmetry” approach or Holme’s famed “deductive approach of premise and conclusion”.

Growing up in Regensburg, the Bavarian corner of Germany the winters would be long and together they would pour over these mysteries together. Gerd was often away for work during the week and so weekends were special story time. As soon as the snow melted the two would head out with their camera’s to capture scenes together. Thomas always thought his dad was a hero with the very impressive Canon AE1 with a fd 35-70 lens. He himself was very proud to sport a Porst Reflex CT-L with 50 mm lens and dink along behind dad to look for exciting things to take photos of. These being the 70s, the boys in their long chord pants with a slight foot flare would stomp around the village and town and be proud to process their photos and project them on the wall in slide format. Thomas remembers falling asleep in the family basement on many evenings as Gerd looked lovingly to the beamed photos admiring both the mighty Alps and mountains they enjoyed for their majestic landscape as well as fun family holidays on the Italian east coast and precious shots of their Mother and new baby brother.

As an expat, I miss my hometown very much. I described to Tom the feeling of home and he went for a week to custom-plan and capture the essence of what I love and miss – this has become an anchor in my life both as a giant picture in my house, and a mini reminder on my screen saver. Every time I feel ‘foreign’, I look at the picture sequence and feel grounded again. This, is huge value in my life.

When Thomas looks over his Dad’s photos and travel journals from the years, he feels the same admiration for nature, and travel as his dad did. Over a couple of decades, Thomas grew into a suit, was educated in finance and became deputy CEO of a regional bank and then an executive at a national investment Bank. Thus, the role of analysing business models, strategic planning and technical orientation became his main modus of operation. Not forgetting the role of storytelling in leadership. Tools, technique, and territory were the focus for 20 years where he mastered commercial banking and investment strategy while monitoring stock movements, team management, and corporate structure.

Great company, great food and a quiet drink around the bush TV. There is not a place anywhere that we’d rather be! – Thanks to Thomas for these amazing images @Craig’s Hut, Mt. Sterling.

Over these years, the interest in observation and method came back to his interest. From a people perspective, doing a study in neuro-linguistic-programming and landscape perspective, buying an overland truck to explore nature and observe the world around him became increasingly important. He would sit for hours at sunrise and observe the ‘morning people’ to see who woke a city up, what characters were around, what myriad of personalities and roles flourished in the dawn hours of great cities. Thomas set an early alarm, head out with a coffee and observe the people and wonder about them. He dusted off his old camera and started to take their pictures. Since the last great passion in photography, much technical development had occurred in the decades with digital photography. These morning photos were nice. But they were snaps. A couple of decades in corporate banking had sharpened his skills and interest in detail, technical excellence, and observing shifts in people and stocks. He burned to have this ability to translate such through a lens. So, he packed his work case, and photo case together. Insisting to get up early and capture the cities he was working in and slowly, methodically re-sharpen his photography skills with the latest technology while applying his tried and tested approach for deductive logic and storytelling.

I recently ordered Thomas’ pictures for the walls of my holiday house. We needed pictures that represented the relaxed and away-from-hectic feeling we want to fall into when we escape to our own private paradise.

He would listen to audio books in the car between meetings of the great detectives and as if they were friends discussing their methods. He completed training as a photo journalist went to storytelling courses, read extensively about the principles of captivating stories and  took thousands of photos and some, started to appear less as snaps and more as captures of beautiful moments. This inspired him to keep working on his skill. He realized that mastering the technical elements was as important as giving a scene time to unveil its majesty. Just squeezing in a few hours of photography before a day of corporate banking would not yield the results he knew he wanted. The observation and evidence-based approach of photography means that a scene will take it’s time to reveal it’s beauty, and just turning up when it was convenient; was not enough to make great photography.

His yearn for time to capture scenery, cities, and people in their unhurried ways called him. He knew, that the type of photography he wanted to pursue was not an in-between thing, it was to be a full-time pursuit.

Our patients need to feel calm and comfortable when they come to see us, thus at our surgery, we hang Thomas’ pictures to create a mood that enables us to start bringing wellbeing forward.

Where you will find him?

Over the years, watching the snow forms on the alps change and the rivers change their flow that life and the environment were changing around him. To not just photograph the beauty of this, but also understand and explain what life is really like, calls him. Altogether, these influences compelled him to focus on it full time and thus you find him either behind a computer with GPS coordinates working out the angle of a sunset over a mountain, or crouched on a path and waiting for that beam to appear (or at the local pub having a lager with the lads and hearing their stories of the town).

We asked Tom to come and shoot our homestead because we want to show the world our piece-of-paradise, and with the drone, the camera and the on-the-go-pro, he really made a living set of images that we can use online to inspire our future customers.