Imagine it is Sunday, a summer morning and you visit favourite bar on the Costa del Sol with your favourite people. Quickly after arriving you sit down under a straw umbrella to protect yourself against the already intensive morning sun. All of a sudden you feel a breeze balancing the hot sun and you realise that it will be a very hot day today. Shortly after you make yourself comfortable and order your first drink while the smell of coffee and hot chips wafts over to your table.
— What happened at my favourite bar in the hours before this scenic moment? This Photo-Story shows the effort and passion from the dawn hours to the arrival of the first guests!  Enjoy the perspective. 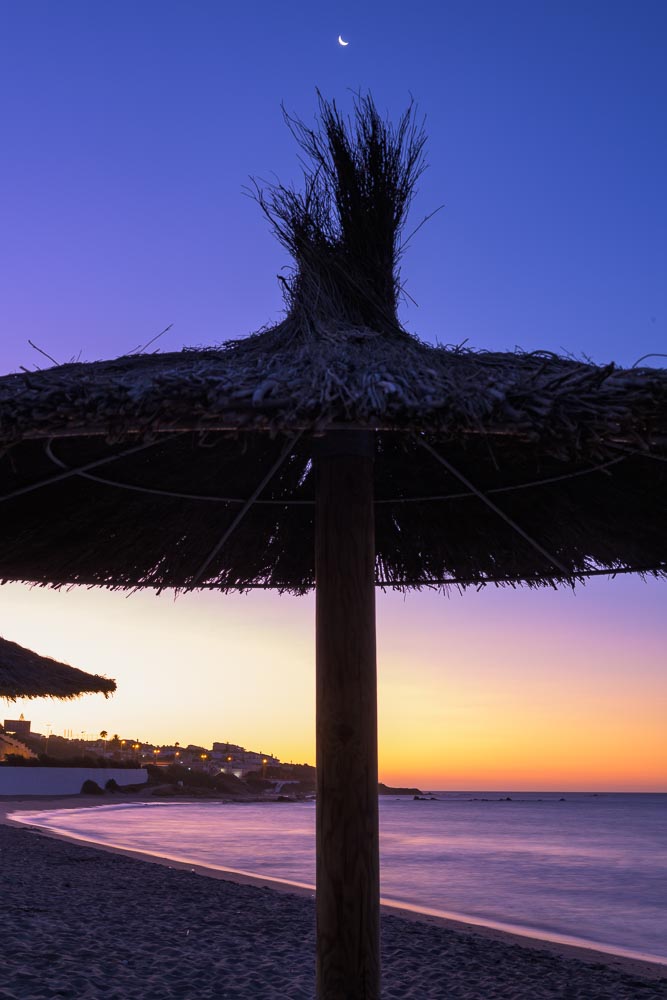 Below the horizon line, almost comically placed, were three giant straw hut beach umbrellas. To me, they looked like cones on sticks; the second of my morning triad of shapes.

It was a morning with no sound, so quiet I could almost hear the satellite orbiting out from under the moon. They say it was a Sunday morning, however, it seemed the dawn of threes. In the absence of sound, and the darkness of the morning, my stimulus was that of shapes and geometry bounded out to me in triads.

First, it was astronomical.

The final slice of an old moon dangled a trio of stars under it. It like the stars were dangling like ornaments under a mobile. An invisible string held them together as they scintillated in almost perfect symmetry. Equidistance apart, yet the top star, slightly off-kilter; reminding me how organised, yet random this world is.

Below the horizon line, almost comically placed, were three giant straw hut beach umbrellas. To me, they looked like cones on sticks; the second of my morning triad of shapes.

At this time of day, poking out of the sand like cocktail umbrellas waiting for a garish cocktail to slush into. Standing to attention, before sunrise. Almost as “Costa del Sol-Soldiers” of pending-party and mayhem due to erupt on the ever-so-quiet beach bar. 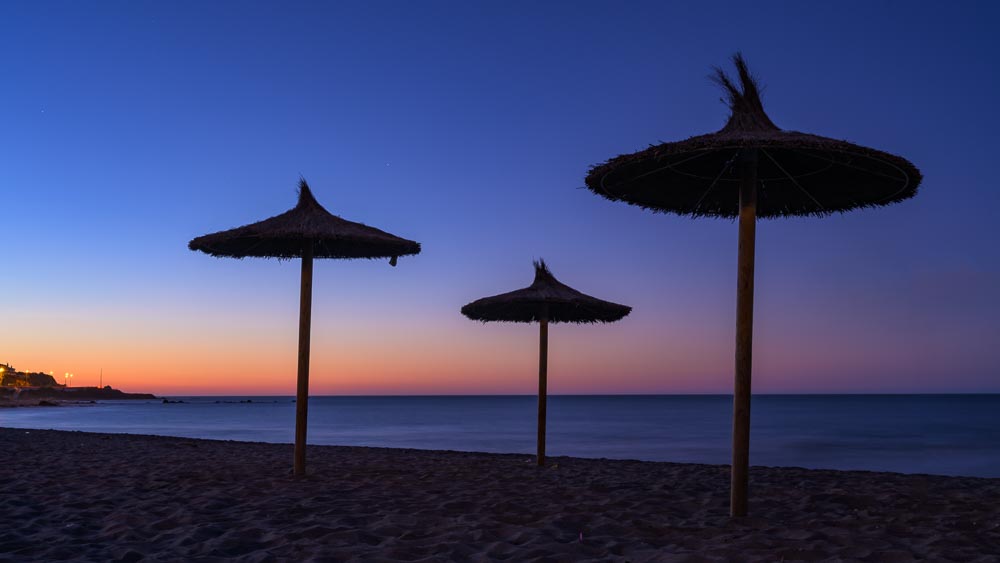 Finally, the sound of morning broke as three seagulls flew out of long grass in the dunes. Two of them taking flight over the Mediterranean, and the third skimming close to the grass. Likely all looking for breakfast from fish to a field mouse. Soon another two types of birds joined them, pigeons and something with a fan-like-tail which scurried along the sand.

Was there really just three of everything? Or is that all I saw?

Were there not more stars visible that night?

Were there more beach umbrellas around?

What was it inside me which looked for order and sense in the world, in a volume that seemed understandable to me?

Is it human nature to see what we can comprehend and make stories of that?

Do we make the world small, so we can grasp it?

What if, we all opened a wide-angle lens on life. What would we see in this world?

And hey, where did that white hut come from? 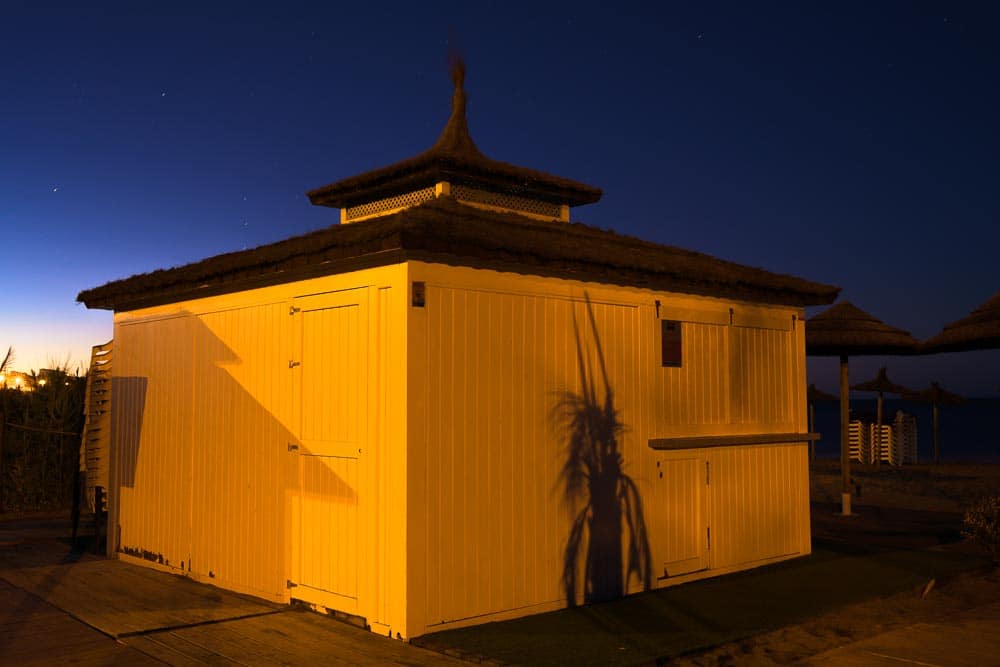 Some beach bars go beyond the cliché. So does Wazza Beach Bar! You expect to see the first person on the beach diving into the water or yoga-ing on the sand. You don’t expect to see a stressed businessman negotiating for an hour as the first lonely on a sleepy beach. 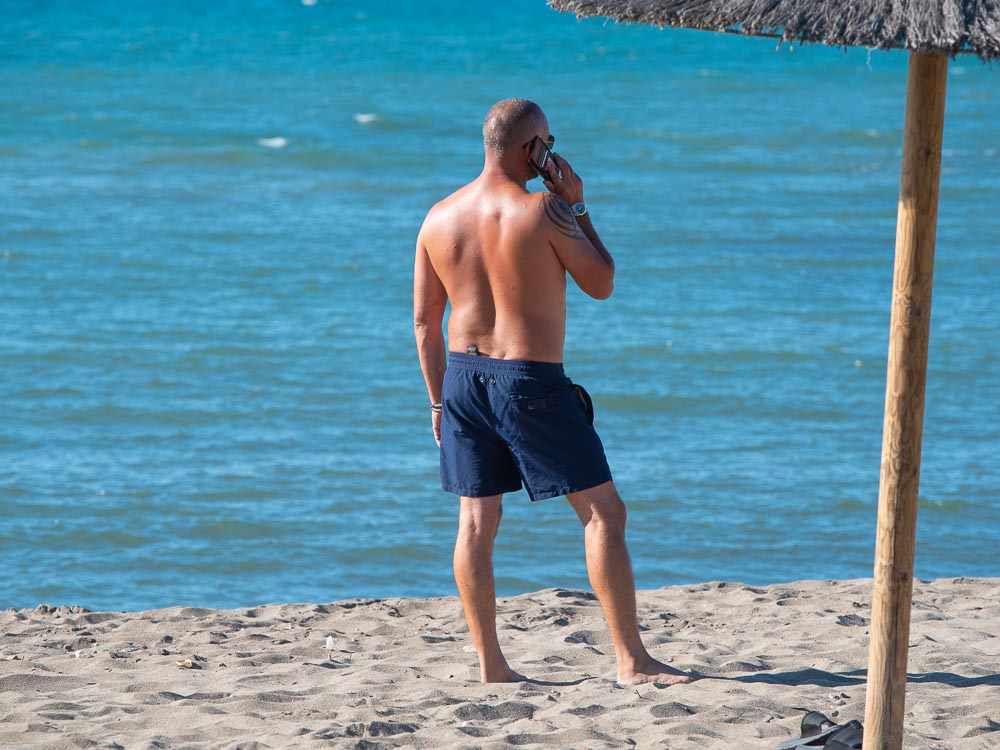 He stood there, shorts, shirtless, and constantly dropping his wrist to loosen the grip of his watchband on his arm. Changing hands to gesticulate into the air. Obviously bringing over points of view which his phone partner at 7 am on a Sunday morning was clearly missing.

Perhaps the beach was his place to escape. However, this exec was still wearing his blue suit and tie. Even if it was hung up in his holiday closet back with his sleeping family. 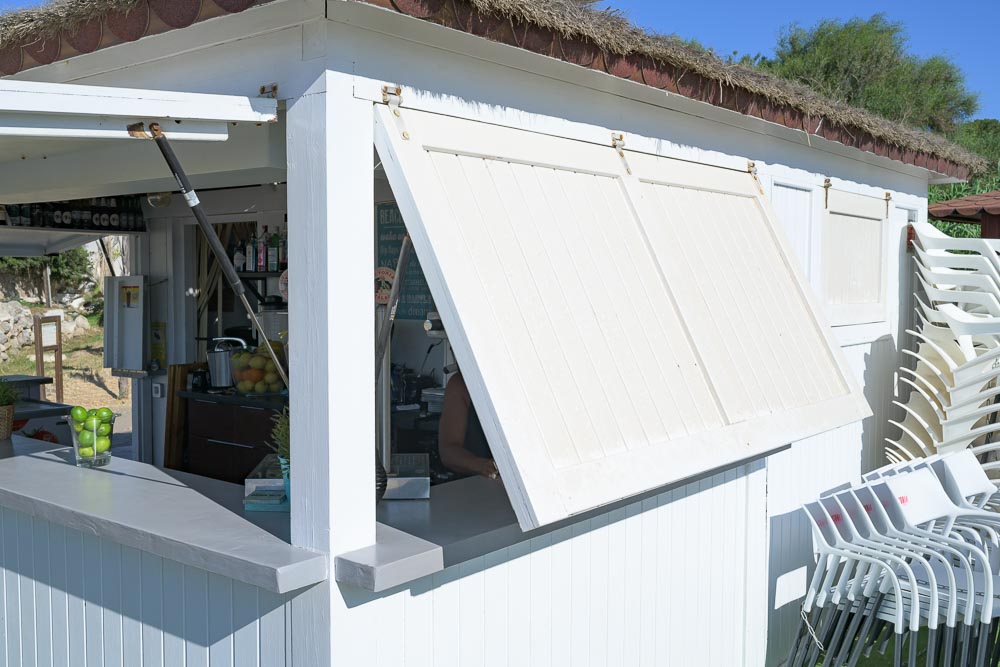 You expect that a southern Spanish beach throws out a few beach beds and chairs around opening time in an informal way — You don’t expect to see precision furniture placement completing set up exactly to the minute of advertised opening time. 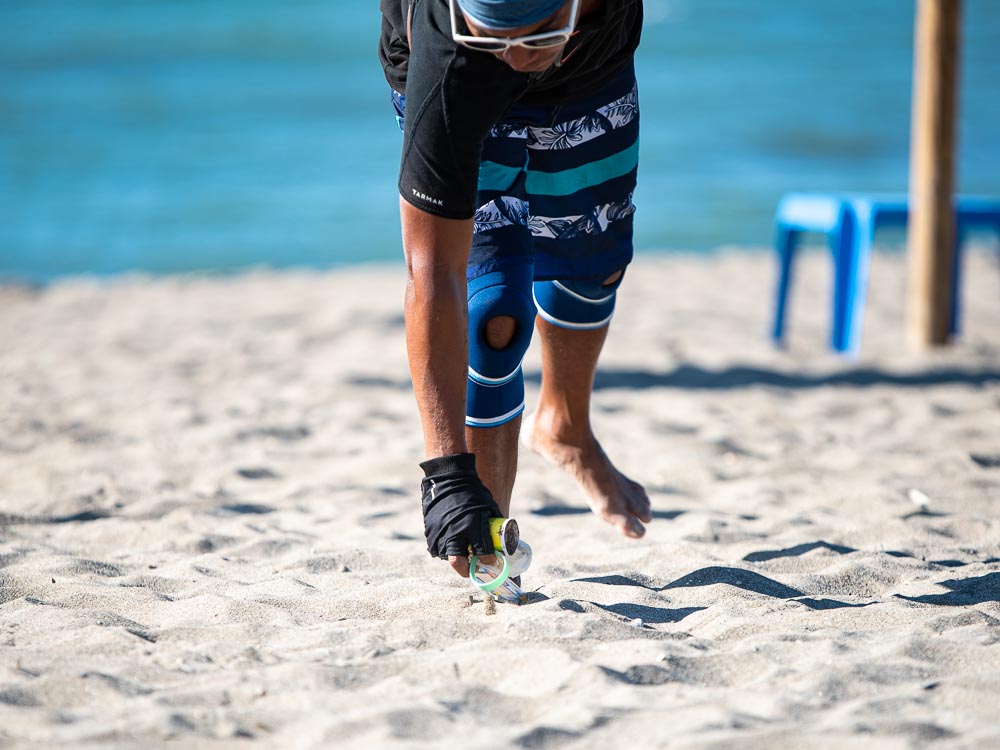 The barista and the barman lined up drinks tables, and accompanying sunbeds with military precision. Navigating sand, picking up garbage, and tying down all loose ends as they went. Lunch tables and sturdy chairs were placed in alignment with optimal patron movement and easy serving. Meanwhile the coffee machine heated up and the first reggae tunes strummed out right on time. 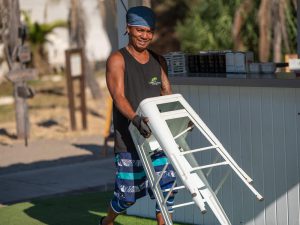 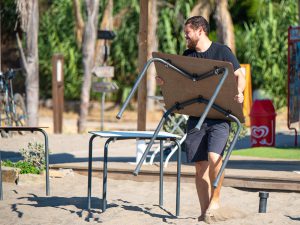 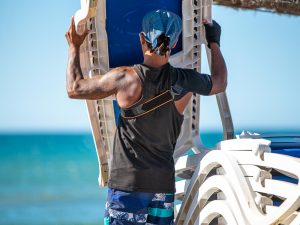 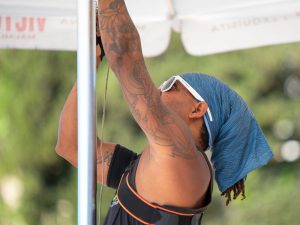 The Costa del Sol is a well known location for sun worshippers. You expect Instagramming couples to be arriving at the front beach beds sun-creaming each other up for hot shots — You don’t expect the most loving and sensuous couple to be a set of grandparents. 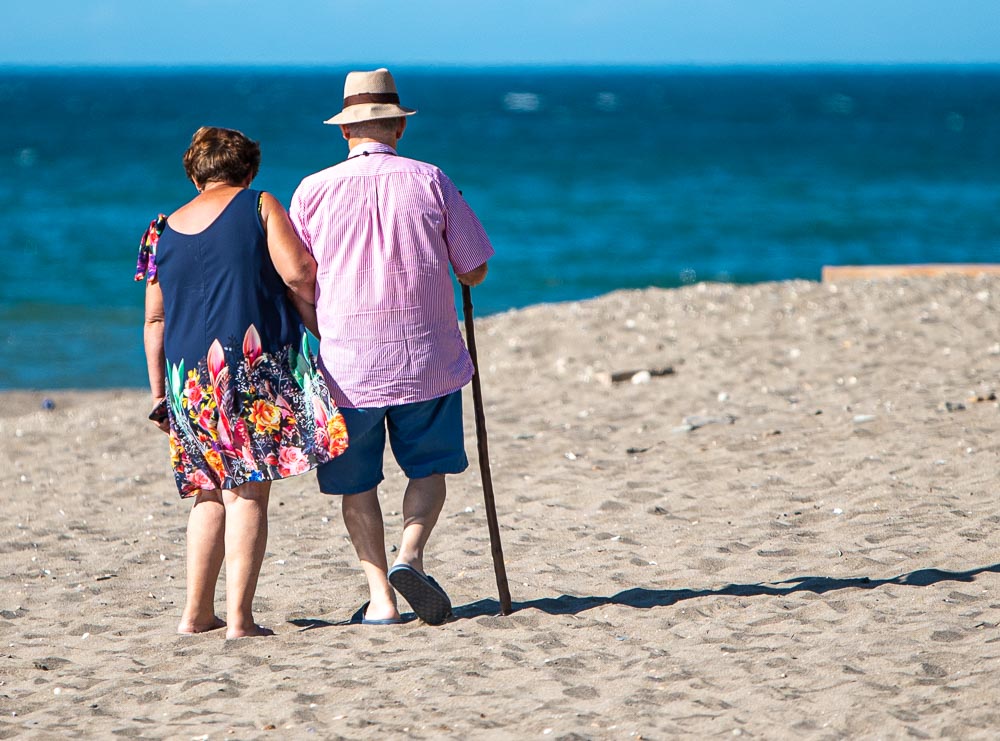 Arriving with their family and grandkids, grandma and grandpa took a side sun bed. Subsequently they sat together giggling as he reached down to cream her chest and inner thigh with the suave moves of the last 40 years. Meanwhile she lifted legs and eyebrows as he went in for more than a creaming. 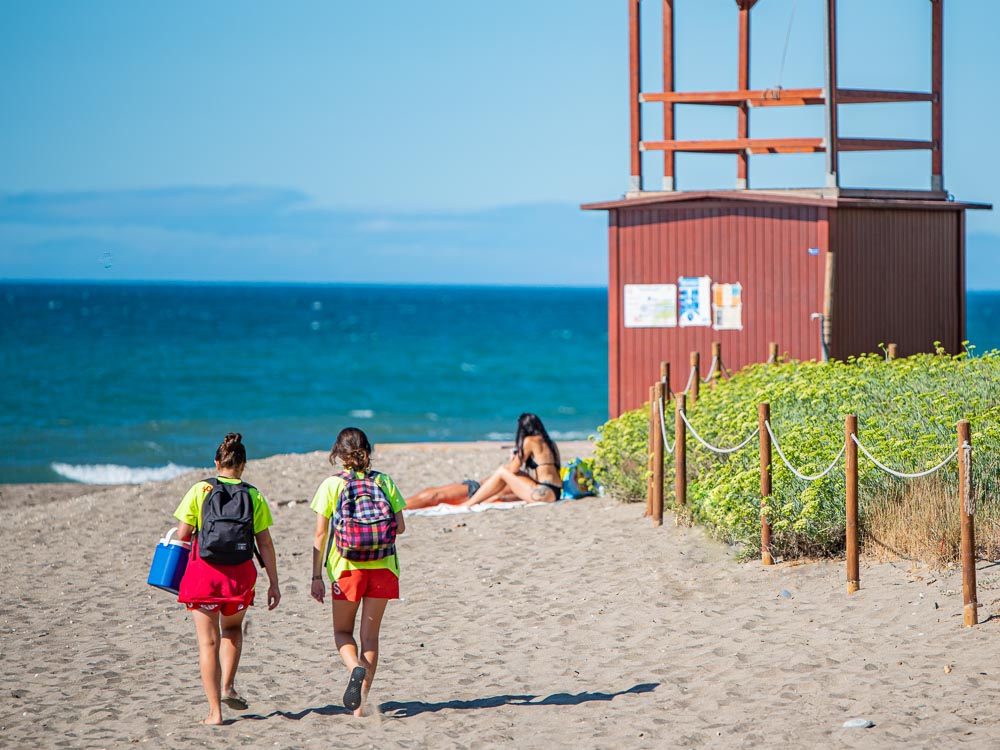 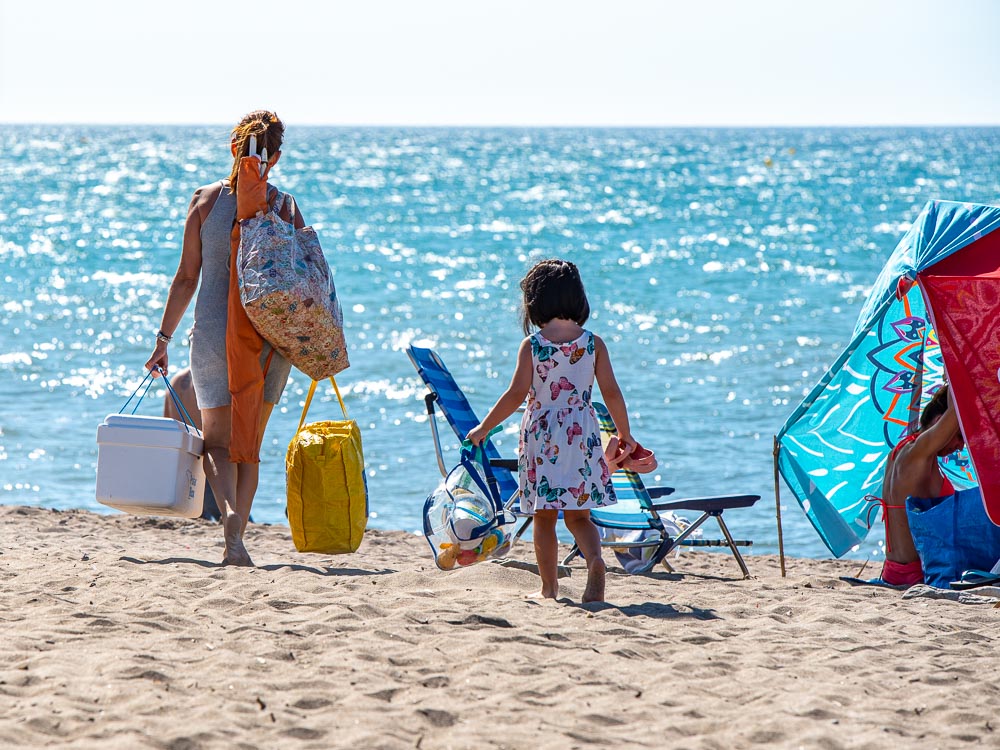 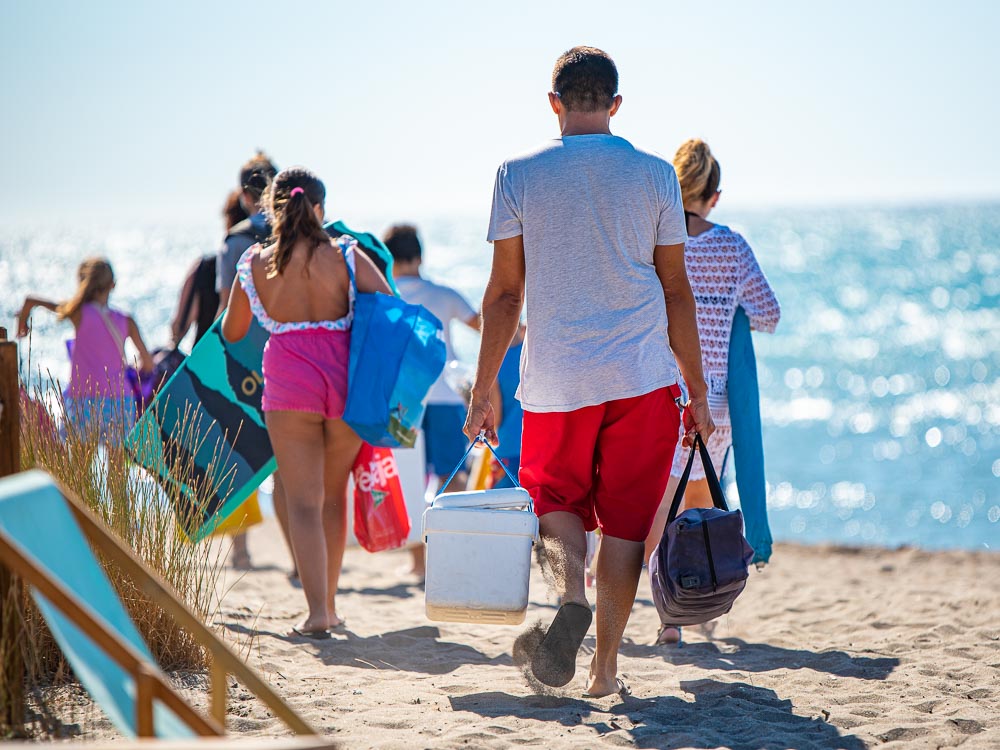 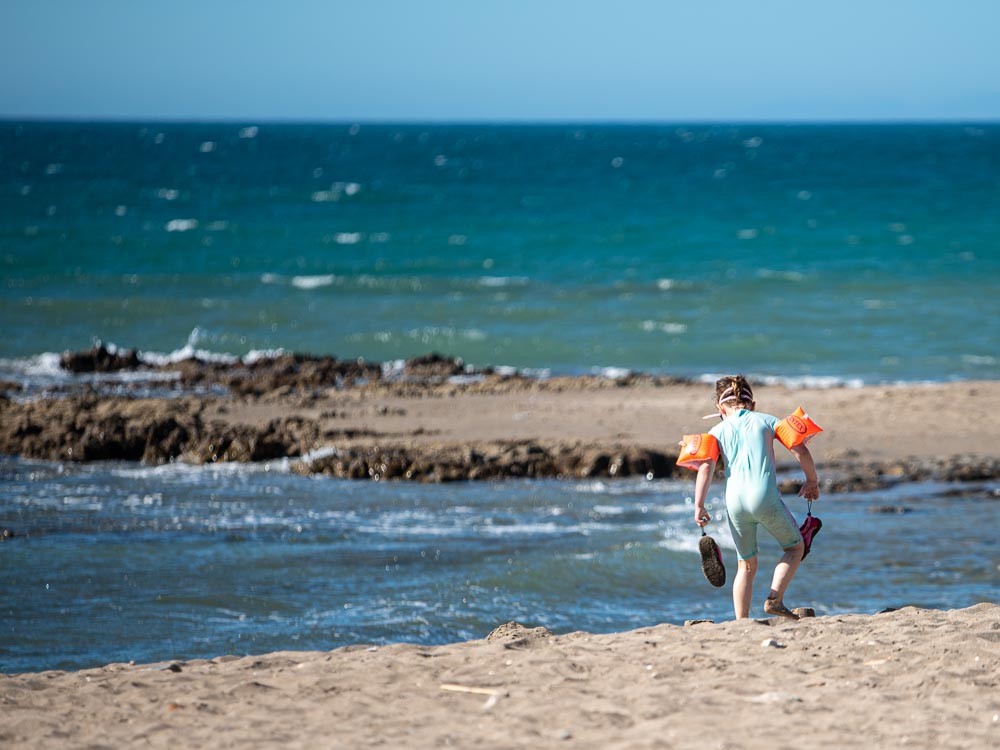 Even the most cliché location, can bring out the unusual aspects of what we don’t expect. It is what makes holiday locations even more interesting to observe and participate in. Thank you Wazza-Team ! 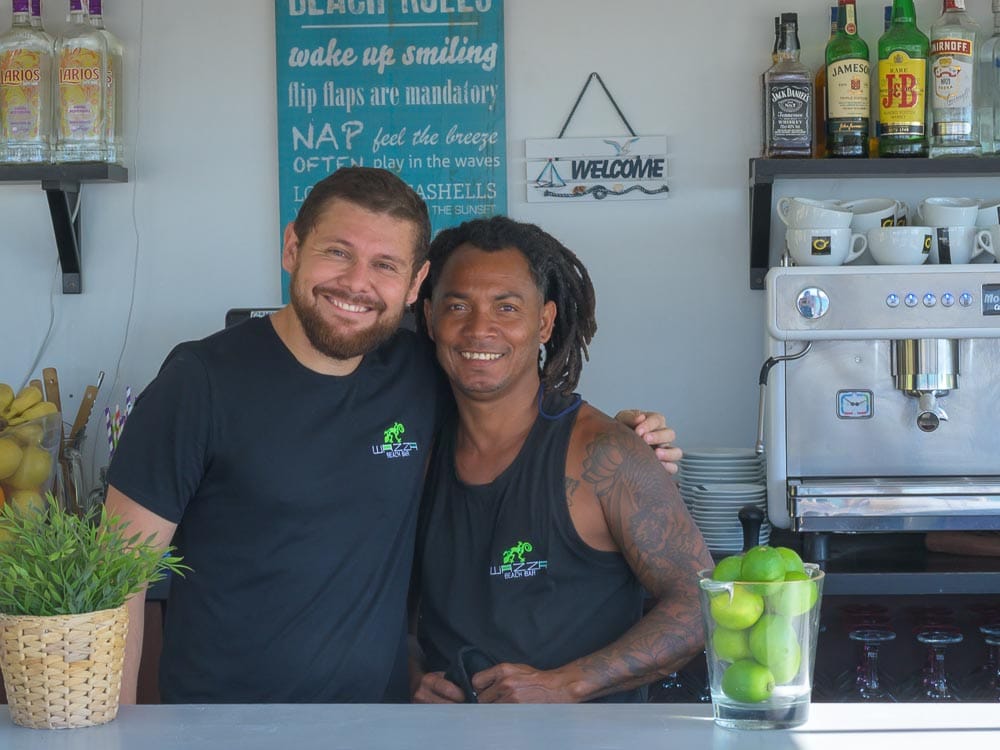